Edit
watch 01:36
We're Getting Mutants in the MCU - The Loop
Do you like this video?
Play Sound
Gulliver's Travels 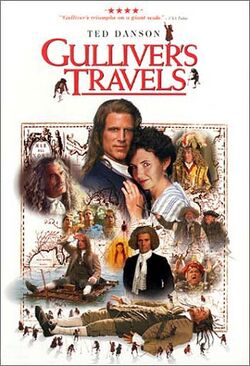 This adaptation of Jonathan Swift's Gulliver's Travels is an American TV miniseries based on the original novel of the same name, produced by Jim Henson Productions and Hallmark Entertainment. Notably, this two-part miniseries is one of the few adaptations of Swift's novel to feature all four of the voyages from the original story. As aired in the United Kingdom on Channel 4, and in the United States on NBC in February 1996, the miniseries starred Ted Danson, Mary Steenburgen, and Peter O'Toole, and was filmed in England and Portugal.

This version features a Dr. Gulliver who has returned home to his family after a lengthy absence. The scenes shift between elaborate flashbacks of his unbelievable travels and brief periods in the present where he is recounting the story of his travels, and has been committed to an insane asylum as a presumed lunatic. While the flashback sequences and the incarceration in the asylum are not in the original work, the miniseries remains faithful to the novel, although the ending has been changed for a more upbeat conclusion. In Swift's telling, Gulliver is so impressed with the Utopian country of the Houyhnhnms that when he returns to England, he is so disappointed with British society that he chooses to dwell amongst the horses in his barn, rather than with his family. In the miniseries however, he eventually dismisses his obsession and returns to a happy life his wife and children.

It took several years for producer Duncan Kenworthy to find the financial backing for the elaborate miniseries. The project required a great deal of Special Effects work, and ultimately Jim Henson's Creature Shop created several CGI wasps and engineered some prosthetic make-up for the Yahoos of Gulliver's fourth voyage. Kenworthy said that, "It [Gulliver's Travels] was something I'd been developing while Jim [Henson] was still alive." "We wanted to do the whole book, and that was what interested Jim."

The miniseries won several awards, including 5 Emmys, was nominated for many more, and was generally well received by critics. Entertainment Weekly's Ken Tucker wrote that, "Everything about this production is surprising, from its choice of Gulliver -- Cheers' Ted Danson in an excellent wig -- to its startling fidelity to Jonathan Swift's 1726 novel," and referred to it as a "big, gaudy, funny production that feels free to give full reign to Swift's blithe vulgarity."