Start a Wiki
The Houyhnhnms are an equine race, and are described as a highly intelligent society of what appear, at first glance, to be ordinary horses. They coexist - to a certain extent - with a savage human-like race called Yahoos on an island known as "Houyhnhnm Land" located off the southern coast of Australia.

Gulliver's description of these horses, the Houyhnhnms, is nearly idyllic: "The behaviour of these animals was . . . orderly and rational . . . acute and judicious." In fact, it is a Houyhnhnms that rescues him from the Yahoos — not by any kind of physical intervention, but by merely appearing on the road to scatter the savages — no physical action is necessary.

Society and contrast with the Yahoos Edit

Houyhnhnms lead simple lives, completely devoted to logic and reason, but ironically very naive. They speak clearly and concisely, act justly and honorably, and abide by simple laws, but fair laws. Every individual knows what is right and wrong, and acts accordingly - for they know no other way. They are a people untarnished by the greedy, politically-motivated, or lustful intentions that Gulliver has observed in humankind. They live clean, peaceful lives, and exist in harmony and contentment. They live by their own golden rule: Cultivate Reason, and be totally governed by it. Their society is so perfect, that indeed they have no concept of a lie, and thus no word to express the action. Their only word for evil is "Yahoo."

The author Jonathan Swift defines Houyhnhnm to mean "perfection of nature." This establishes an important distinction: the horses are uncorrupted by passion, neither basic nor cultivated. For example, they lack a grasp of the concept of charity. They are also never victims of temptation. However, Swift never goes on to suggest that they symbolize perfect human nature. Quite the contrary, they manifest innocent human nature, taking everything in life at face value, feeling little malice or compassion for those outside their society. What they do, say, and think is similar to basic human nature, but the displayed character of the Houyhnhnms is far from Gulliver's own (as much as he wishes to believe they are like-minded}. They are ignorant of many small transgressions which most societies would consider forgivable. An example of this is in their inability to understand lying — or even the necessity for ever doing so.

With the contrasting differences between the Houyhnhnms and Yahoos, Swift establishes a complete spectrum of existence, with each race on an opposite end. The horses are completely innocent-minded, having never (in theological terms) fallen from grace - while the Yahoos seem over-passionate, animalistic, and corrupt by a lack of control over their primal urges and desires. The Houyhnhnms are stone cold reason; the Yahoos are red-hot carnality. In the middle of these two extremes is a luke-warm Gulliver.

Houyhnhnms' hooves are able to use tools (such as a needle or a flint) or do farming work as humans do.

Houyhnhnms live up to seventy to seventy-five years, and they usually die of old age.

They train their foals to become more physically fit by running up and down hills and stony ground, and they organize four races every year. They also raise their foals without any differences by their gender except domestic management for their fillies. Younger Houyhnhnms also cannot eat oats until they have reached eighteen years of age (except on some days), and they rarely drink milk; and Houyhnhnms of any age graze more often at evening than in the morning.

In adherence to their desire for reason:

Even though the Houyhnhnms have no religion, they believe that when one of their members dies, he or she "returned to their first mother". They also do not mourn (or even celebrate) when it happens, as they accept death as a routine part of life.

They do not have a writing system, and their lunisolar calendar does not have weeks.

Two principal virtues in Houyhnhnm culture are friendship and benevolence. As a result, war is completely unknown in the Houyhnhnms' culture. 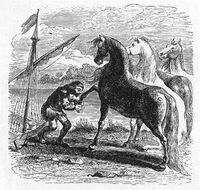 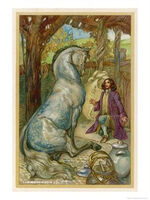 Add a photo to this gallery

Retrieved from "https://gulliverstravels.fandom.com/wiki/Houyhnhnms?oldid=4668"
Community content is available under CC-BY-SA unless otherwise noted.