The Lilliputians are a society of people around six inches in average height, but with all the arrogance and sense of self-importance associated with full-sized men. Typically greedy, jealous, manipulative, conniving, violent, selfish, and untrustworthy; they are, in all ways, an accurate portrayal of their "giant" counterparts. They live on the island of Lilliput, located on the Indian Ocean.

The author (Jonathan Swift) makes use of the Lilliputians as a device for satirizing actual events and people in his own life. Swift's model for Flimnap, for example, was Robert Walpole - leader of the Whig party and first prime minister of modern England. Walpole was known as a very wily politician, as the book illustrates, making Flimnap the most skilled of the rope dancers. Reldresal, the next most skillful of the rope dancers, probably represents either Viscount Townshend or Lord Carteret, both of whom were well known as political allies of Walpole.

The articles Gulliver is forced to sign in order to regain his freedom directly relate the political climate of Lilliput, and conversely to that of the real-world England of the time. These articles parallel specific real-world English codes and laws. Likewise, the ridiculously over-complicated formalities which Gulliver must observe while swearing to the articles (he must hold his right foot in his left hand and place the middle finger of his right hand on top of his head with the right thumb on the tip of his ear) exemplify an aspect of unnecessarily ceremonious Whig politics: petty, red-tape harassing.

In other ways, Swift continues to use the Lilliputians to show that English politicians were blood-thirsty and treacherous. He records in detail the bloody and heartless methods the Lilliputians plot to use in killing Gulliver, and then proceeds to comment ironically on the overall kindness, grace, sincerity, and righteousness of kings in general. In the novel, out of mercy, the emperor of Lilliput decides to blind and starve Gulliver — clearly a direct reference to King George's treatment of captured Jacobites, whom he executed — after parliament had labeled him the most merciful and lenient.

All in all, Swift draws a thought-provoking, undeniable, and specific contrast between the normal, though naive average man (in the form of Gulliver), and the diminutive but cruel politician (in the Lilliputians); the politicians always appear as a fraction of a man alongside Gulliver.

Lilliputians measure time in months instead of years, and their lifespan corresponds to how many months have they grown (so 100 months, for instance, would be 8 years). 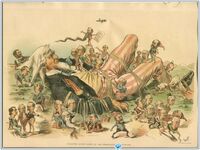 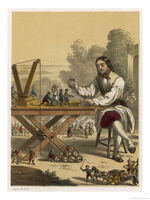 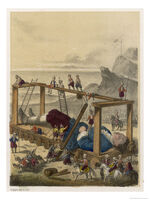